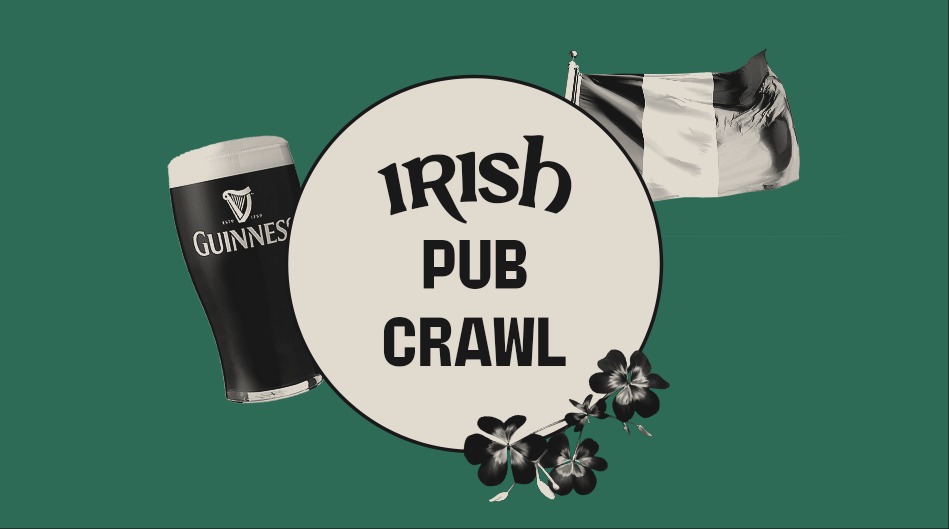 Liverpool is full of Irish Bar’s and there’s a good spread all over the city centre, some next to each other, some with a decent walk between the next. If you get off the train at Lime Street Central, you will see a good few in front of the main entrance across the road. If you’re up near Dale Street and Tithebarn Street, you’ll find a lot more. Down near the Baltic Triangle? There’s even a few down that way.

With the distance between some of these bars, we won’t include the Baltic Triangle bars in this particular crawl. These Irish Bars can all be found the areas of Seel Street, Bold Street and near Lime Street Central.

It’s a hard choice to make when choosing the first Irish Bar to make this worthwhile, but Pogue’s is an absolute great place to start. Situated on the top end of Seel Street, this Irish Bar has the praise of every who goes there. A very Irish style bar, warm atmosphere, great selection of drinks and breakfast is also served here.

Of course, it’s recommended to enjoy a Guinness here, it’s been said to be really good. There’s a decent looking drink list too, with many craft cans and some unusual drinks available. You can find the drinks menu on their website here

Probably one of the most popular Irish Bar’s in Liverpool, Fitzgerald’s is up for stop #2 in this pub crawl. This heavily Irish decorated bar is home to great Irish atmosphere and live music every day. Located on Slater Street, this is just down the road from Pogue’s and next to a large number of other bars. It’s not a bad little place to watch live sports in either. Fitzgerald’s seems to busy most days, so depending on your timing of the pub crawl and the size of the group, you may struggle to get in here at some points. There is some outdoor seating but it’s not likely you get seats on a busy warm day.

This bar prides themselves on being as authentic as an Irish bar outside of Ireland can be, so expect the Guinness to be of top quality here also. They are also open until the late hours, so it’s always a place you can come back to later in the night for the live music/DJs.

Working our way back into the city centre, next up in Mccooley’s in Concert Square. One of the largest Irish venues in the city, Mccooley’s is a great next stop where you can watch live sports, play pool, rendezvous with crawl stragglers and enjoy some food. The food menu here is pretty good, and the portions are quite big so it might be a good chance for something to eat before stops 4 and 5. There’s a large drinks menu here and a separate cocktail menu here which may sway you away from the Guinness. Mccooley’s is also open until late, and tends to get extremely busy as do all the venues in Concert Square.
If the football is on TV, then this is also an amazing place to watch that match mid pub crawl!

The next stop is a couple mins walk away and is taking us away from this area, drink up and head over to Liverpool Central Station.

The sister bar of Fitzgerald’s, Lanigan’s is another extremely Irish venues and is located in between a large number of other venues on Ranelagh Street. Lanigan’s is next door to The Irish House, both getting busy at most times of day, and both are open quite early until the late hours. You can watch live sports here, live music and enjoy a great atmosphere inside or, if you’re lucky, sit outside on the limited outdoor seating. A great spot for our fourth pub, Lanigan’s is a fan favourite which is also a great place to start drinking on another occasion.

The last stop in this pub crawl is just up the road, so enjoy a few more drinks around here if need’s be, or head back down Ranelagh street afterwards!

Due to the closure of The Liffey (updates to follow), our alternative recommendation for stop number 5 is next door – The Blarney Stone. It’s a little closer to stop 4 and is another great little pub! Similar to the Liffey, live music and karaoke can be enjoyed here as well as a proper local pub atmosphere. Although this bar is a little smaller than the rest, there’s enough room to have a few pints before moving on to wherever you have in mind.

This will be one of many Irish pub crawl’s we will post on our blog, next time with a more spaced out one that will take you to some amazing parts of town including Tithebarn Street and Baltic Triangle.

This site uses Akismet to reduce spam. Learn how your comment data is processed.